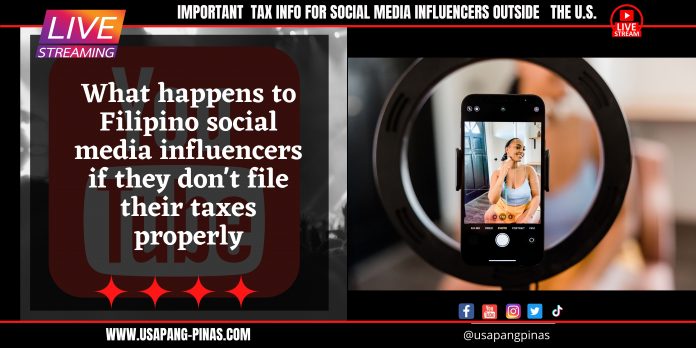 If you are a social media influencer on Youtube, Facebook, Tiktok, and Instagram who earns income from your social media accounts, you MUST file your income taxes properly because the lenses of the BIR are zooming in on you. You will be in trouble if you try to evade your tax obligations, and is punishable by law.

It is not only the Philippine Tax Agency that is making sure you pay your taxes and comply with your obligation to the Philippine government but also the U.S. government is making sure every centavo (one cent/penny) generated in America by the non-US citizens through Social Media platforms is paid by non-US social media influencers who are considered as independent contractors.

How the United States government makes sure all social media influencers living outside the U.S., who are making money in Youtube from their U.S. video viewers, pay their taxes in U.S. properly.

The U.S. government is always on the lookout for individuals who are generating income in the United States and its territories. The U.S. agency in charge of making sure earners pay their taxes is the Internal Revenue Service or the IRS (BIR equivalent). What the IRS does is oblige American business owners; corporations down to sole-proprietor business entities, to collect tax information from their independent contractors. Once the tax information is collected, the U.S. company like Google which owns Youtube and Google Adsense, would be able to collect the taxes from the influencer from their monthly salary. Before Google pays the influencer his/her salary, they first remove the 30% from the total income before they give the remaining salary to the influencer. This money deducted every month is called the withholding tax and will be paid by Google to the U.S. IRS. This way, the U.S. government is assured, independent contractors comply with their tax obligation to the U.S. If Google will not withhold contractor’s tax dues in preparation for the following year’s tax filing, for sure, a lot of contractors or influencers will not comply and would try to evade their tax obligation. It would be hard for the U.S. government to crack down on the U.S. tax evaders because they are outside the U.S. jurisdiction.

How the BIR or Bureau of Internal Revenue is cracking down and penalizing social media tax evaders?

The Bureau of Internal Revenue (BIR) has released on August 16, 2021, a “Memorandum Circular No. 97-2021, with the subject: Taxation by any income received by Social Media Influencers, mandating all of them to file their taxes properly.

This memorandum circular is issued to clarify and remind all social media influencers, may they be individuals or corporations, that they MUST comply with their tax obligations under the Philippine laws and if they fail to do so, they may be facing possible harsh consequences such as paying high penalties and imprisonment.

The easy lives of the social media influencers are already a thing of the past because, as of this year 2021, the BIR has become so serious in cracking down on them and seriously pursues tax evaders.

Meanwhile, On the other side of the world, Google, which owns Youtube, has already begun deducting taxes from Youtube revenues, generated from U.S. Youtube video views. The statutory tax rate for income earners living outside the United States is 30%. This amount will be deducted from your Youtube gross revenue. If your U.S. views generate $500 a month (₱24,885.15 per today’s currency conversion rate), $500×30%=$150. $150 (₱7,465.55) is the deductible amount and will be deducted from your monthly paycheck. This $150 is withheld by Google to be paid to the United States Internal Revenue Service (IRS for short) on the following year’s tax filing period by Google also. IRS is the equivalent of BIR in the Philippines. So, $500-$150=$350. After Google has deducted $150 from your gross income of $500, you will be left with $350 (₱17,419.61) in your account for that particular month. This ₱17,419.61 is your gross income in the Philippines. Gross income means your overall/total income which is not your taxable income. Ibig sabihin, ang ₱17,419.61 ay hindi ang basehan ng iyong pagbabayad ng taxes sa Pilipinas. Ang ₱17,419.61 ay ang inyong pangkalahatang sahod. Babawasan pa ito ng mga monthly expenses. Ang amount na matitira ay tinatawag na taxable income.

Is there a way to lessen the 30% withholding tax imposed by the U.S. Internal Revenue Service?