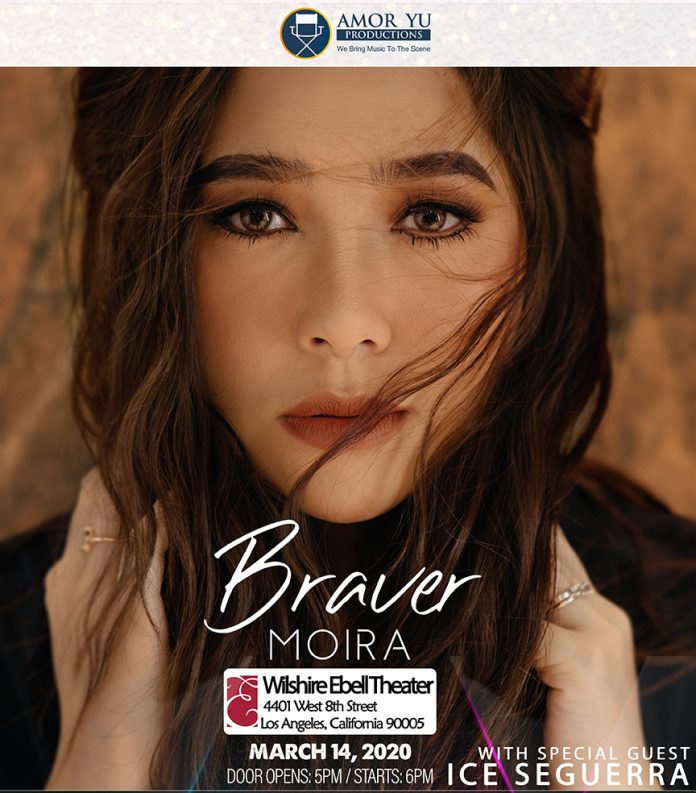 BRAVER Moira de la Torre with Special guest Ice Seguerra About this Event Moira de la Torre a Filipina singer-songwriter. She rose to fame for her covers of Imago’s “Sundo”, Moonstar88’s “Torete”, and the Himig Handog-winning single “Titibo-tibo”. Dela Torre’s career started as a voice artist working on corporate jingles and theme songs, including McDonald’s “Hooray for Today”, Surf’s “Pinalaki”, and Johnson & Johnson’s “Signature of Love”. Dela Torre joined the first season of The Voice of the Philippines, impressing Coach apl.de.ap with her rendition of the song “Hallelujah” of Bamboo Mañalac, and became part of the Team Apl. Dela Torre performed singles for the official soundtracks of the romantic films Camp Sawi and Love You to the Stars and Back. In October 2017, she performed in the finals of the songwriting and music video competition Himig Handog. Dela Torre’s interpretation of the Libertine Amistoso song “Titibo-tibo” made her the grand winner.In late October, she became a member of the acoustic group ASAP Jambayan. In February 2018, her first concert “Tagpuan” sold out in four days on its first night; it was directed by John Prats. Due to public demand, the concert had a second night. Her 2018 debut album, Malaya, featured her hit singles “Malaya” and “Tagpuan”. In December 2018, she became Spotify’s No. 1 most streamed artist in the Philippines. Ice Seguerra- formerly known professionally as Aiza Seguerra, is a Filipino actor, singer-songwriter and guitarist. As a child star, Seguerra appeared in more than 30 movies and TV shows to date. He often portrayed the role of actor and fellow Eat Bulaga! host Vic Sotto’s daughter in numerous films. During his late teens, Seguerra began pursuing a career in music; singing and playing the guitar. His single “Pagdating ng Panahon” became a major hit in 2001 which enabled him to start a music career. Seguerra also performed in Singapore for the Singapore Repertory Theatre presentation of the stage play Avenue Q. On January 7, 2013, Seguerra entered the Himig Handog P-Pop Love Songs contest as the interpreter for the song entry called “Anong Nangyari Sa Ating Dalawa”, written by Jovinor Tan. He performed the song in the grand finals on February 24 at the SM Mall of Asia Arena. The song eventually finished in first place for Best P-pop Love Song .

Filipinos were discriminated in San Francisco, California in the 30s

Implications on Joe Biden’s presidency to the Philippines

Philippines Produces A Lot of Nurses But Short of Nurses. Why?

Filipinos were discriminated in San Francisco, California in the 30s